When you’ve been a leading manufacturer for oil and gas seismic products for over 40 years, you need technology that helps you keep your competitive edge in productivity and profitability. For Geospace Technologies, there was a need to expand their portfolio of machining technology to be able to manufacture a wider range of parts. After careful consideration and review of their machine shop’s needs, Geospace Machine Shop Supervisor, Justin Henry, saw that the answer was 5-axis.

“We looked at a few things, price and quality, what can handle the complexity of the parts we make, then we came to the resolution that the DVF would handle what we needed, reduce our setups, and find a machine that could help us reduce our cycle times as well.” – Justin Henry, Geospace

At Ellison Technologies we always recommend our customers to consider the overall cost of ownership. What kind of distributor support comes with the machine? What does the cost of maintenance, machine and tool life, and Overall Equipment Effectiveness (OEE) look like?

Geospace took these factors into consideration, did their research, sought the advice of Kirk Knight from the Ellison Houston team, and set their eyes on the DN Solutions America (DNSA) DVF 5000 5-axis machining center. 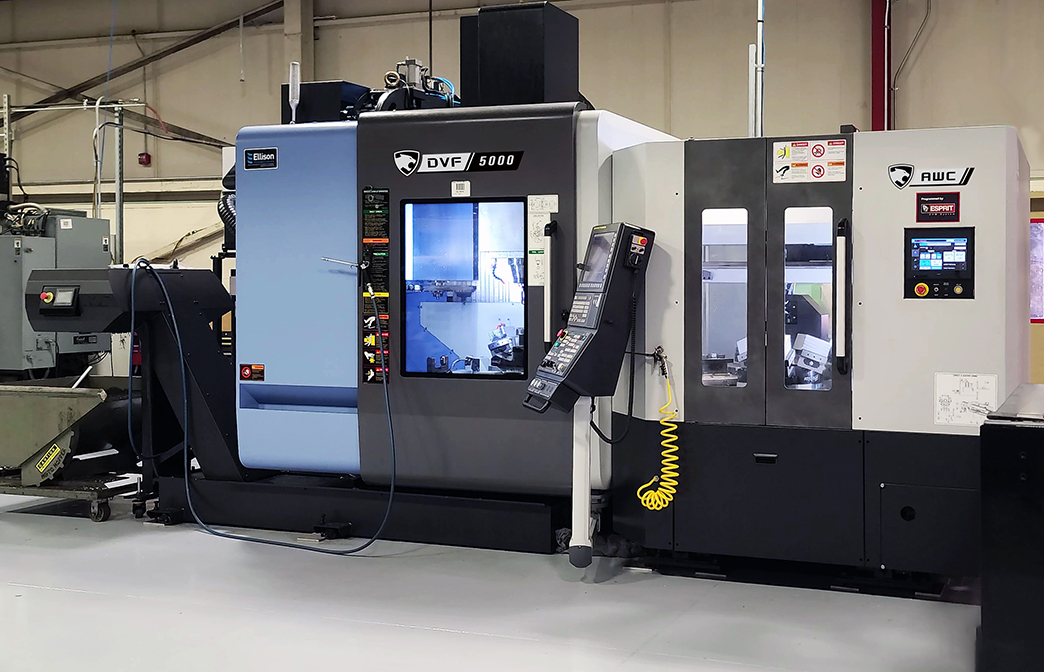 The DVF 5000 checked all the boxes on Geospace’s requirements and gave them the ability to achieve increased production, efficiency, and profitability. Starting the with the 18,000 RPM spindle, the DVF 5000 gave Geospace an 80% increase in spindle speed greatly increasing their cutting speeds and reducing their cycle times.

With the ability to machine parts from five sides in a single setup, Geospace was able to reduce their setups from five down to two by eliminating manual part rotations, loading and unloading from multiple machines, and with the swiveling and rotating table, machine hard to reach angles unachievable on a standard 3-axis mill.

As an added option, Geospace opted for probing and laser calibration technology to further reduce their cycle times. A tooling laser was added to improve tool check speeds and probes for part and tool alignment to improve accuracy.

Taking productivity even further, the DVF came equipped with an 8-pallet Automatic Work Changer (AWC) allowing Geospace to achieve lights-out, unattended operation. Each pallet is fitted with workholding capable of loading 3 parts simultaneously allowing 24 parts to be completed unattended. With the support of the tooling laser and probes, the DVF can run lights-out without any issues.

Ultimately, Geospace was able to achieve tighter tolerances, reduce their production costs by 60%, and reduce cycle times from 1.5 hours down to 45 minutes. 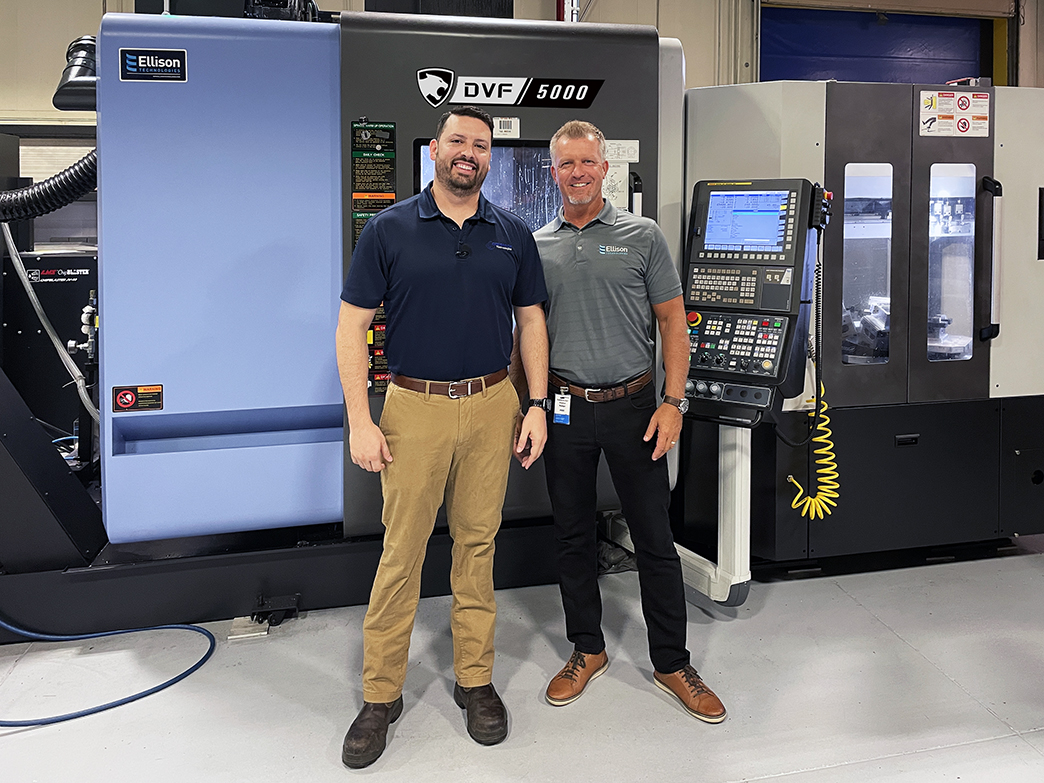 Helping U.S. manufacturers compete and win is at the core of our business and we take pride in being able to offer our customers more than just a machine. From discovery and installation, to training and support, we stand by our customers every step of the way. So when Justin began searching for their 5-axis solution he was also searching for a distributor that offered reliable service and support; Ellison Technologies fit the bill. While working with Kirk, Justin discovered all the benefits, features, and automation options of the DVF as well as the added value from the training, service, and support that came with the machine.

“Ellison Sales team was probably the #1 reason why we decided to go with the DVF. They showed us a lot of the new technologies that are out there, and why and how they benefit you on the customer side as well. We were able to optimize our productivity, reduce costs, all with the new styles of technology associated with the machine." – Justin Henry, Geospace

Before the arrival of the DVF, the Geospace team was hesitant making the switch from their older technology to 5-axis. Although new technology can be daunting at first, the training support from our Applications team made the transition to 5-axis a breeze. From lasers and probing to automation and controls, our experts helped Geospace get up to speed on all the new technology of the DVF 5000.

ROI and the Future

When Geospace put in the order for their DVF, the productivity and efficiency of the standard features was enough to increase their capacity and profitability but went a step further with the future in mind opting to include several of the DVF’s optional features. The initial ROI was estimated to be under two years, but with the 8-pallet AWC, expanded 120 slot tool changer, high-pressure pump, tooling laser, and touch probes, the ROI is expected to be even shorter.

“Every part that we run through it [DVF] has had about a 30-60% cost reduction.” – Justin Henry, Geospace

Since the integration of the DVF into their machine shop, Geospace’s business has gained success in contract manufacturing by machining parts from industries previously unattainable. The 5-axis capabilities have allowed Geospace to machine a wider range of parts and the OEE and ROI of the DVF 5000 has proven to be beneficial in overall cost and cycle time reduction. As Geospace’s business continues to grow, they have their eyes set on replacing more of their older technology with DN Solutions machines and automation, with support from Ellison Technologies.