When Matt Blankenship started Innovative Technology out of his garage in 2019, he had never operated a CNC machine. Today, the company is known for its quality of work, superior finishes, prompt turnaround time and excellent customer service. Based in Mooresville, North Carolina, big changes are on the horizon. When we spoke, Matt was planning his second relocation to a larger location.

He grew up racing cars with his father, but as they moved up the ranks, they found themselves at a financial disadvantage when it came to competing with other teams. While working as a body hanger for Hendrick Motorsports (Jeff Gordon/Chase Elliot), he decided to strike out on his own after watching a TITANS of CNC video on YouTube.

On a budget, Matt started out with a Haas ST10 lathe, then added a HAAS VF4. He depended on YouTube as his chief source of education. A lot of YouTube. It soon became obvious that he had a hidden talent for machining, but it was hour upon hour of plain old hard work that made the difference. Over time, the shop evolved from an efficient to a superior operation, capable of manufacturing small prototype parts to large quantity parts with tight tolerances.

At first, Matt did a lot of trial-and-error machining along with some improvised tooling to complete demanding jobs. He became comfortable with the variety of materials used by his customer base (automotive, aerospace and medical).

However, he finally realized that with the equipment he had, he was working harder than he needed to for satisfactory results. “Quality is everything to me,” Matt said. “If I’m not happy with what I’ve machined, I won’t ship it. That’s why I was getting frustrated with the machines I had on the floor at the time.”

Ready to move up to a 5-axis machine, he was considering a Haas UMC-750SS. But after a lengthy, expensive and unsatisfactory realignment of the Haas lathe, Matt wasn’t sold on the brand or their customer service.

Good advice from Ellison and TITANS 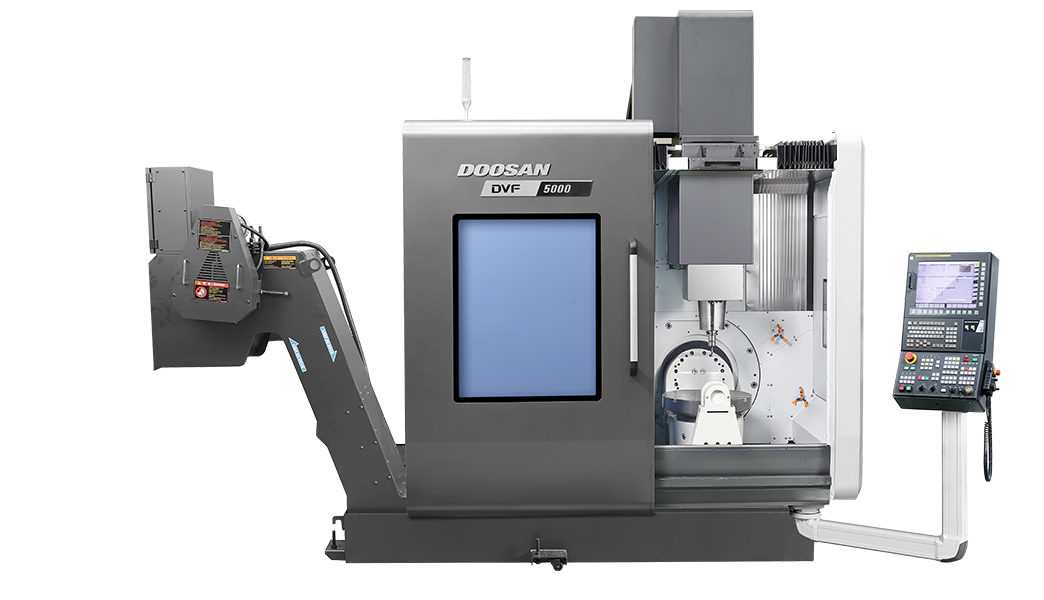 As luck would have it, as he was looking for a machine, Matt saw a TITANS of CNC Boombastic YouTube video profiling the Doosan DVF 5000. He emailed the TITANS team for their impressions of Doosan five-axis machines since they have previous experience with Haas machines tools as well. They messaged back that while the Haas is a good starter machine, the Doosan would outlast most other models on the market.

Matt looked carefully at the DVF 5000 Boombastic promo detail, checked the dimensions of the machine, measured the shop floor and placed a call to his local Ellison distributorship in Charlotte. After speaking with Ellison Technologies, he was convinced that the DVF was the best value and immediately placed an order. “I tried to go the inexpensive route once, but soon found out you get what you pay for,” he said.

Matt watched as the Ellison techs set up the DVF 5000, asking plenty of how-to questions. Their professional attitude and knowledge made a big impression on him. Thanks to their help, he was making chips almost as soon as they left the building.

Tom Sawyer, Ellison’s Manager, Applications Engineering, also provided major support. “Tom helped me with parameter settings that I didn’t know about, all the little detail things, kinematics and such,” Matt said. “If you shoot him a text, the answer comes back right away. He’s pretty much replaced YouTube as my major source of information.”

The DVF 5000 package Ellison set up came with CAMplete TruePath verification, post processing and simulation software. “It was a good call. The collision detection brought me peace of mind and lowered my learning curve,” Matt said. “Plus, it helps save time and money.”

Matt thinks that the DVF 5000 and its integrated 5-axis table is an unbeatable combination. Apparently, his customers think so, too. “When I bought the machine and posted about it on my social media platforms, a huge amount of work just gravitated towards me,” he said. “The number of emails and messages from people that reached out to me was just unreal.”

Matt estimates the purchase of the DVF 5000 has doubled, if not tripled, his production. “This is a Doosan Shop now,” he declared.

If you’d like to maximize your machine tool output, let Ellison put together the perfect CNC package for you.